What would you do if someone offered you a loan at a negative (real) interest rate for 10 to 20 years? Would you take it? If so, how would you use the money? Hopefully, you’d invest it in something that would give a positive return – maybe buy a house, or some other large capital investment.

For the United States government this scenario is not hypothetical. Real interest rates are, and have been negative. This is not some artifact of high inflation expectations (which would show up in a large spread between real and nominal yields). This is not some monkeying with markets. This represents the fundamental problem that due to the continued slow worldwide  economy there is a scarcity of good investment opportunities – both businesses and at this point countries in Europe (supply) , and a glut of people who are looking to cut back and save more (demand). 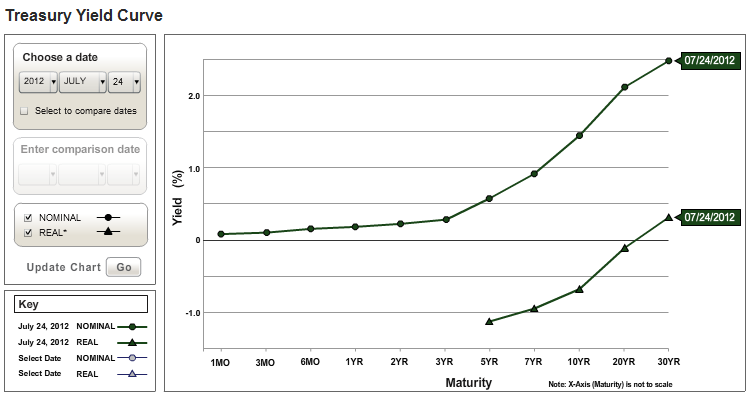 The fundamentals demand that the government undertake long-term investments – build schools, fix bridges, invest in human capital (make money by giving grad students interest-free loans). This makes sense even ignoring the Keynesian argument for stimulus. These things need to be done, and should be done while borrowing costs are so low. But alas, politically we’re not even going to talk about these facts or these options.