I crunched the numbers for my fantasy football league (methodology details below) and here are the results:

The probability distribution of each team and their rank (grouped by tier) follows:Next week the Economists will play the Eiferts in what will almost be a playoff game. The winner has around a 90% probability of making the playoffs, while the loser has around a 30% probability.Even though the Broncos have a game on both the Economists (me) and the Eiferts, the algorithm is pretty bearish on the Bronco’s chances. Part of that is their 20 points below me (and 120 below the Eiferts) in the tiebreaker, but part of it is their more difficult schedule.Cowboys are definitely in. Jets and Vikings are almost surely in. Blue is almost surely out. The real battle is for those last two spots (5+6). 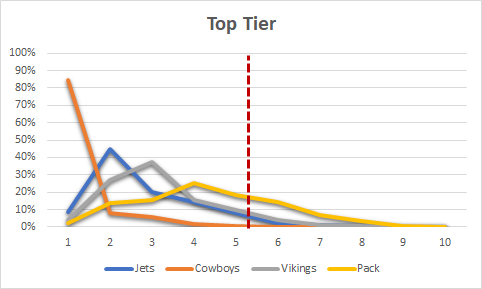 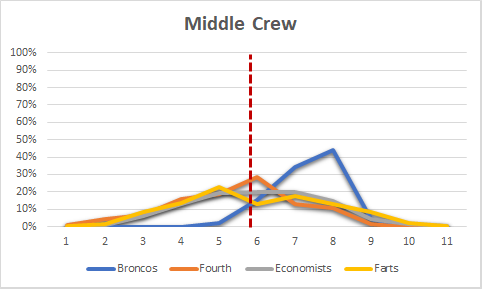 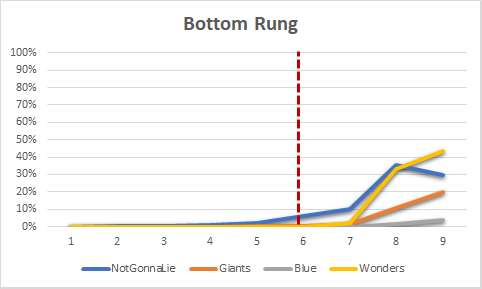 P.S. Methodology may follow in an update. Short version: used a version of Pythagorean expected wins to compute win probabilities (exponent of 6) – this seems to be similar to what Yahoo uses in their projections. Had to “guess” at some lineups since some teams have players on byes in future weeks. Then just computed the probabilities for each of the 262,144 possible win / loss outcomes (2^6=64 outcomes per week for three weeks). Also, had to make assumptions about points scored for the tiebreakers (gave the winner the greater of the two expectations).

One Reply to “Fantasy Playoff Probability”