I came across in interesting sentence in the CBO analysis of Paul Ryan’s budget proposal: “The path for revenues as a percentage of GDP was specified by Chairman Ryan’s staff. The path rises steadily from about 15 percent of GDP in 2010 to 19 percent in 2028 and remains at that level thereafter. There were no specifications of particular revenue provisions that would generate that path.” (p11)

Here is a historical look at Federal Government revenues as a percentage of potential GDP: 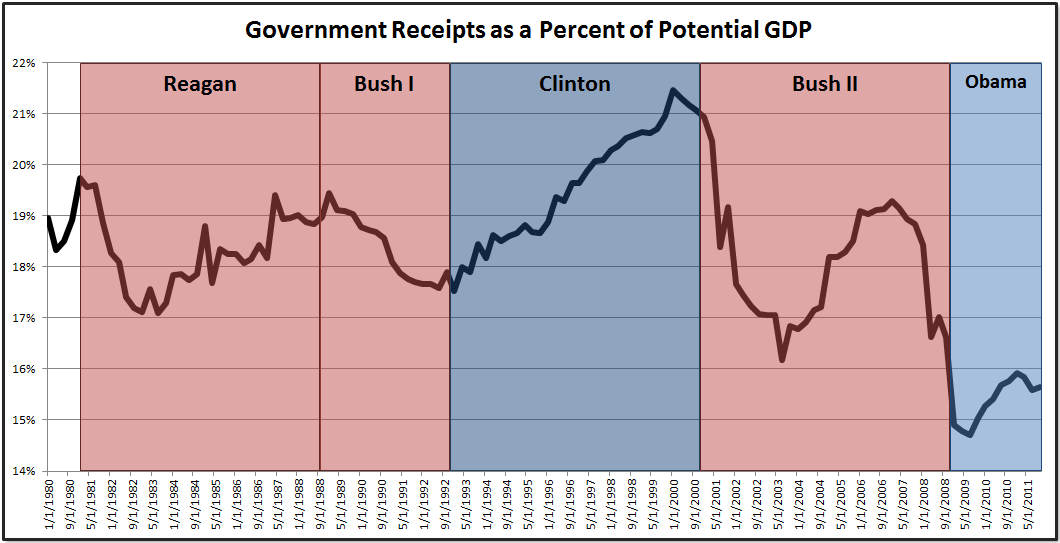 The truth of the matter is the federal governments revenues are at historical lows. In fact, looking back as far as the FRED data source goes (1950s) we have never had such a long time where revenues have remained under 16% (excel data here). The truth of the matter is that in order to restore fiscal health, revenues (i.e. taxes) have to go up. Granted a lot of the drop in revenue has to do with the recession – less people working and earning less money means less income. You can clearly see the recessions and booms effecting receipts. While raising taxes in this economic climate may not be the soundest policy, long term even Paul Ryan agrees that we need more revenue. He and Romney just like keep it vague by saying that they will “broaden the base” instead of going out there and saying that taxes may actually need to return to the Reagan rates to restore fiscal health.